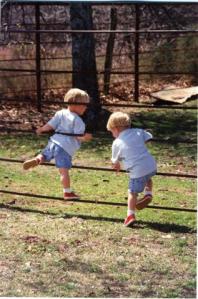 became their sport of choice.  When they were young they played any kind of ball that was in season.  They played organized team sports; they played with just a bunch of kids on the playground; in my opinion that is the best kind.  They also played an awfully lot of one-on-one; it didn’t make any difference what kind of ball; if all they had available was a leaking air-up beach ball or maybe about a half roll of duct tape wadded up to resemble a ball they made that work.  They would figure out a set of rules and a scoring system; yes if you’re gonna play you gotta keep score.

Frequently the two of them faced each other in a game of baseball.  The rules allowed the use of “ghost runners”; I think a lot of kids used this system, adjusting the rules as necessary depending on how many players were there or maybe just depending on whose yard or neighborhood was hosting the game.  It didn’t really matter, just as long as everyone understood and agreed to whatever rules were in effect that day.

They were at the lake with Sharyl and I, I think they were about eight or nine; it was a typical hot Oklahoma August day.  I thought it was a sit in the shade kind of day, they thought it was a good day for a “ghost runner” baseball game.  They had been playing for at least two hours; stopping only as necessary to make sure there were no rules infractions, some of those discussions were a little heated but they always worked things out and the game continued.

I had spent the afternoon in the shade with a cold drink, observing, on a non-interference basis of course.  Sharyl had spent that time in the house, probably doing laundry, fixing dinner and a host of other things.  I didn’t know how those things got done; I have since learned that someone has to do them.

She walked out to the “ballpark” and suggested they quit playing, come in take a shower and get ready for dinner; They offered the typical “in a minute” or “after this inning” response.  In a few minutes she returned and suggested in a much stronger voice that they probably should get their rears in gear and do as they had been told; they responded with more promises.  I stayed in the shade and didn’t get involved, those things are more fun as an observer than they are as a participant and I knew Maw Maw was fully capable of handling the situation. She returned in a couple minutes and just as I expected, she handled the situation; the ballgame was over.  On their way to the house, Conner said in a very emotional voice “But Maw Maw it was only the top of the third”.  He was probably down a run or two.

I love you Conman, I miss you every day; I continue to try but I can’t understand why your “last at bat” came so soon, after all it was only the “top of the third”.  Please give your Maw Maw a hug for me and tell her I love her and miss her.

Thanks for listening, please keep me in your prayers.