That title leaves it wide open.  I’ll try to keep it on those three things and in order.

If you don’t have your turkey plucked (or thawed) you probably should get that started.  My turkey is thawing and I have knocked the dust off the fryer and inventoried my list of supplies. Dava and Rick volunteered to host our group for Thanksgiving.  We accepted the invitation.  My only responsibility is to get the turkey fried and make it across town in time for dinner.  I think I can do that.

I am thankful the nine of us will be together for the holiday.  Those two empty chairs will probably always be visible but I think it gets a little easier with time.

I hope the holiday is kind to you and yours.  If you travel, please be safe.

The last time I was here I thought I had managed to tuck the memories of November ’08 away.  I guess I’m not as tough as I thought. I haven’t had a good week, I see no reason to share details (you’ve heard it all before) but I guess the anniversary of the third week of November ’08 will always be a little difficult for me.

I think one of the most asked questions in America is:  Do you remember where you were when you heard President Kennedy had been assassinated? I think anyone born before 1955 can probably answer the question.

I was in Army basic training at Fort Polk, Louisiana, sitting in a classroom learning about The Uniform code of Military Justice or something. A sergeant interrupted our instructor and broke the news.  We initially thought it part of the harassment or training.  The next few days were extremely hectic, we didn’t have access to newspapers and very limited TV, and that whole military thing was new to us and kind of scary.

I have my thoughts on what really happened (doesn’t everyone).  I also feel very strongly that Viet Nam would have been a different kind of conflict if it even reached the conflict level, had Lee Harvey Oswald not made it to Dallas that day.  President Kennedy was comfortable enough with the world situation, in August ’63, he quit drafting married men; that is why I was at Fort Polk about two years ahead of schedule.  I know we had a few advisory troops in Nam in ’63 but if escalation would have been anticipated the draft would not have been altered.  That is strictly my opinion based on “Patten Logic”.

I think that is enough, maybe too much, on holidays and memories. Moving on to winter projects.

Winter days and nights have always been my least favorite time; last year was the first winter I have lived alone.  I wasn’t prepared for the loneliness I experienced.  I did some genealogy research, wrote a lot of blog posts and spent way too much time bouncing around the Internet.

I would like to introduce you to this winter’s project. 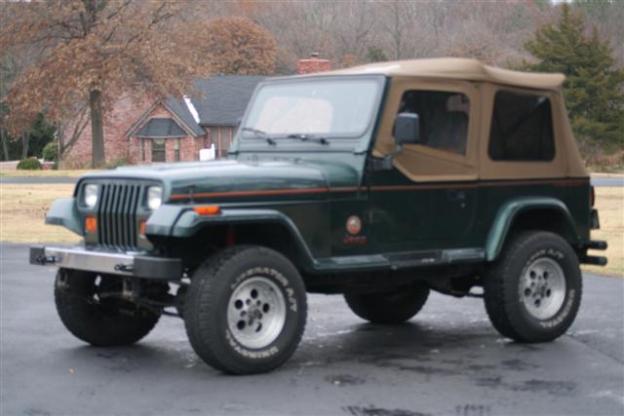 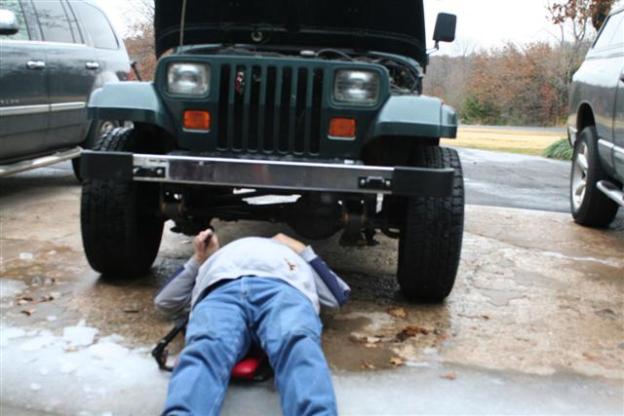 I need that great big hammer. 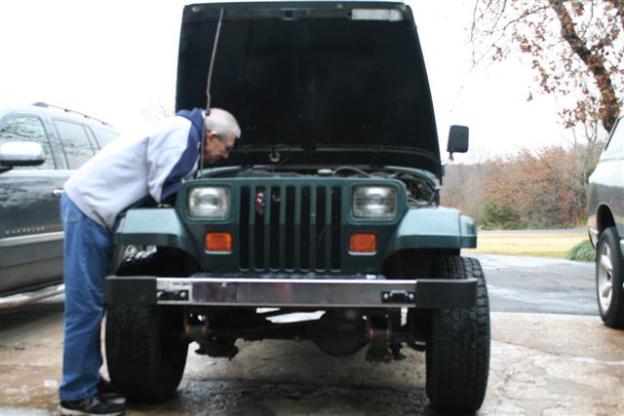 It doesn’t have a name yet; oh I’ve already called it a few things but I don’t think those are suitable to share.

I have always had a little bit of a car habit and had been pondering getting maybe a fifties or sixties something to play with.  I have also always found the jeep to be a little intriguing.  I drove my company commander around in one for a little while about fifty years ago. I decided I needed, wanted is probably a better choice of words, a Jeep.

I shopped on craigslist among other places. I found a couple the ad said needed a little TLC; the ad should have said, major project or maybe you can save it.  This one was advertised as ready to go; it should have said, needs a lot of TLC.  I am looking forward to spending some time with it this winter and see how much of that TLC stuff I can take care of.  The thing is really fun to drive; I just hope I can stay out of it long enough to take care of a few problems.

It is a ’93 and has some of the things you would expect with any 20-year-old vehicle and that it is a jeep adds a whole nother list of things it needs.  It really is in pretty good shape, just a lot of little things, like brakes, windshield wipers heater and the list goes on.

Last week when I was crying about being sick I mentioned doing one kind of stupid thing.  The Jeep was involved in that incident.  I bought it about 50 miles from home.  It had the Bikini top on and the full top was missing a few parts.  I drove it home on a cool rainy day with the Bikini top, a little like driving a convertible with the top down.

One unexpected benefit; I have always driven too fast.  Believe me that won’t be a problem in this thing.

I don’t really expect it to be good to me but I think it will be good for me.  I think it will spend the spring, summer and fall at the lake and by next winter it will need a bunch more TLC.

I hope your Thanksgiving is good.  I could use a little prayer to help me through mine.

Please consider a donation to your comfort level to the cancer research organization of your choice.

Almost three weeks ago, I wrote about having a little case of the crud. I was sure I would be back on my feet in a couple days.  I am about 99% back; the timetable just exceeded my estimate by 15 or so days.

I’m not sure what went wrong.  Maybe after 5, sick-free, years I forgot how to handle a little discomfort, or the years have taken a toll on my toughness or maybe, just maybe I had a real bad case of some really tough crud.  I am going to go with number 3.

Did I seek medical attention?  No, there are medical professionals and facilities all over town, some of them are even open 24/7, but it was just a little cough and congestion and I was sure it would be better tomorrow. I think I made honorable mention for Walgreen’s customer of the week. I guess I was finally right; it is better.

I kind of took care of my self and didn’t do anything real stupid.  There may be one exception; I am not going to talk about it today in fact I may not talk about it all.

Potato soup has always been a “make it feel better” meal in our family.  One night I wanted some potato soup real bad, almost bad enough to go to the kitchen and make some.  I could have made a couple phone calls and had some potato soup but remember that pride I speak of from time to time.

The stuff bounced around a little and some days were better than others.  I took advantage of a couple of the better days and enjoyed the foliage in southeastern Oklahoma and just a little over in Arkansas.  I have always affectionately called that part of the world Lapland, where Arkansas laps over into Oklahoma.  Maybe I pushed it a little with that run but fall colors don’t wait until you feel better.  It was cloudy in the morning and rained most of the afternoon but the colors were beautiful and I had a great day in spite of the crud. 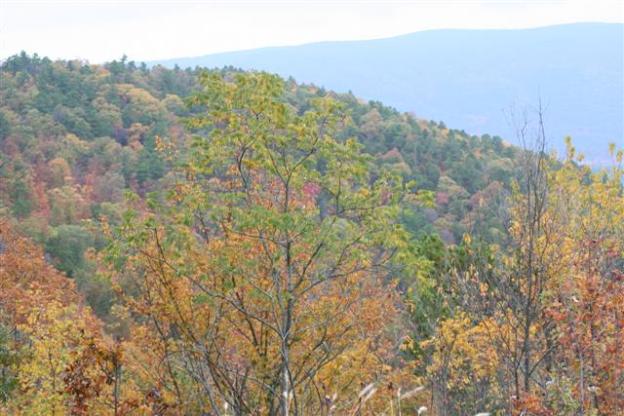 Somewhere on the Talimena Drive

It was the first time I had been to Talihina, Mena, Smithville, Beavers Bend and Broken Bow in years. The Branding Iron restaurant in Mena, Arkansas is worthy of a little of your time if you venture down that way. I had a great co-pilot.  Thanks, Patty, for keeping us between the lines, finding The Branding Iron and for tolerating my cough.

Five years ago this month the comfortable little world in which I had resided for many years experienced sudden, drastic and permanent change.  That change although no longer sudden and drastic continues to evolve.  I have managed to tuck the very personal and very private memories of November ’08 away in a special place in my heart and see no advantage to you or me if we share them again.  I think you understand.

Please keep me in your prayers and God Bless.

Gradual Change might be more appropriate for the title, but it isn’t often I get to use a word with a silent B; especially when that silent B isn’t preceded by an M.  I know of two others.

Some words used to define subtle are: delicate, elusive and obscure, I think those are somewhat descriptive of the change I have experienced since I sat here about a year ago and used Plateaus as a title.

I talked about the sudden drop to a low emotional plateau and the slow and difficult climb back up that emotional ladder to a higher level.  I closed that one with the following words:

I thought by now I would have progressed to still another level; maybe I’m just impatient.  I don’t think this is as good as it gets, I fully believe higher plateaus are out there; I just wish I could find that next set of stairs. I’ll be okay,

I have taken a hard look in that proverbial mirror the past few weeks and I believe there has been subtle but significant progress. 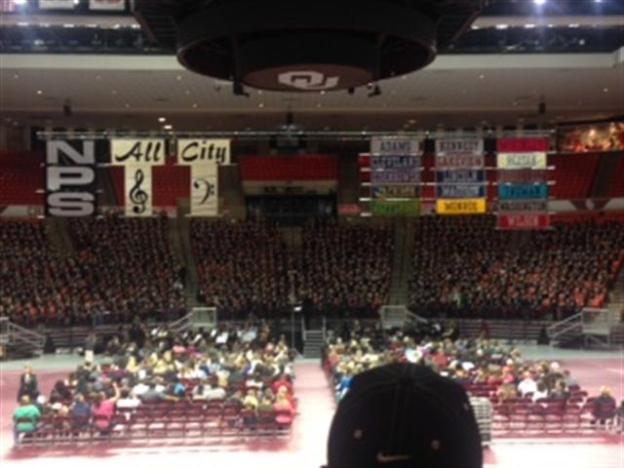 A year ago I went to Luke’s (Luke is the good looking one in the middle) musical programs because I knew I needed to and I was supposed to.  Sharyl and I went to a lot of them together; she enjoyed each one of them; I probably endured more of them than I enjoyed.  I went to this one because I wanted to and I enjoyed it. 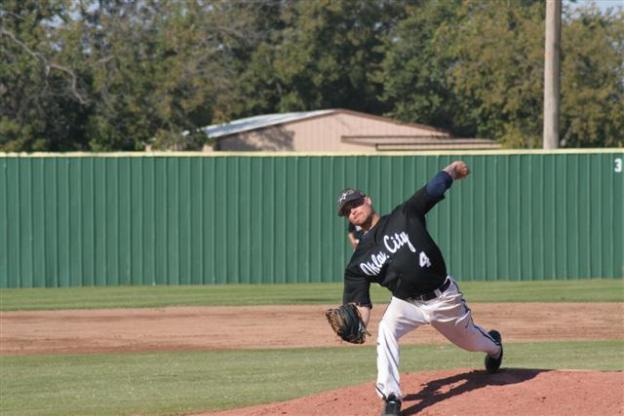 I went to the ballpark last week to watch my favorite lefthander, I went because I wanted to and yes I enjoyed it.  Was it as fun as when WE went to watch THEM play?  No, it probably will never be, but that is no longer an option.  The important thing is I went I had fun and look forward to the next trip.  For you baseball guys he looked good and threw 5 strong innings in an inter squad game. 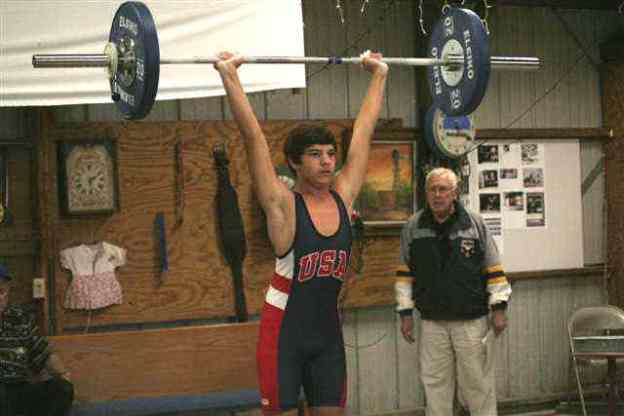 I crossed the Red River to watch Braxton lift some weights. This kind of competition is new to me.  I don’t know enough about it to be a vocal fan.  I am sure Sharyl would have figured it out and been hoarse from cheering by the time we left.  The important thing is I went because I wanted to and I enjoyed being there.  He qualified for nationals.

I didn’t spend time with Rylie.  I’m sure she was studying, isn’t that how all college freshmen spend their time.  She will always be my favorite grand daughter.

I know there are more tough days ahead but tonight I feel comfortable closing this one with: I don’t know if higher plateaus lie ahead, I hope so, if not, I am comfortable and content for the first time in a very long time.  I think I can change my frequently used “I will be OK” to “I am OK.”

Those other two silent B words are debt and doubt.

Keep me in your prayers.