If their dad would have been good at what he did my girls might have kicked dirt and made memories at places like Cheyenne, Calgary, Pendleton, Houston, Denver, The Cow Palace and maybe even the NFR.

Because he was mediocre, and that may be stretching it a bit, they got to kick dirt and make memories and friends in Waurika, Greensburg, Hill City, Pratt, Yates Center, Hennessey, Carnegie, Okeene and Dodge City.

I’m not talking about my day job; I was probably just mediocre at it too but we’re gonna reminisce and rodeo a little bit tonight.

The rodeos held at the places in paragraph one are on everyone’s list of the best of the best.  The ones I dreamed of standing on the announcer’s stand with a microphone in my hand.  Those places in paragraph two are on the list of places I actually stood on the announcer’s stand with that microphone in my hand.

Some of those summer weekends were spent with the Lazy J (Sharon, Ks); Circle A (Guthrie, Ok) Flying (I think) W (Blanchard, Ok), Hy-Acres (Mulhall, Ok) and Carpenter Rodeo from Clearwater, Ks.  Their families became like our family.  We knew barrel racers and calf ropers and bull riders and bull doggers that seemed like family.

The summer of 1977 may be the best “family time” we ever had, I know it is at the top of my list and it was at or near the top of Sharyl’s.  The girls still have fond memories of that summer.  We drove a lot of miles, met a lot of people, had a lot of fun and we did it together.

By the summer of ’78 Sharyl’s career was sprouting wings and my day job included airports and suitcases.  It took me a few more years to accept it but it was time to say good-bye to rodeo.

For the past couple years I have been scanning our old family pictures.  It not only preserves them for the girls and for future generations it sends me down memory lane.  This week I scanned some from ’77.  The quality isn’t good; they were taken with one of those Instamatic 110 cameras. Sharyl isn’t in any of them; it was her camera.  If it is OK I will share a few of them. You can see how we rolled.

We saw a lot of parades. I usually had to announce them at no additional cost. 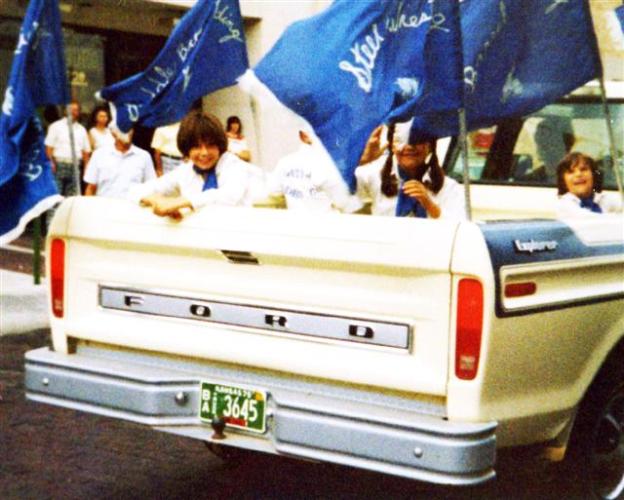 Participated in a few of the parades.  Dodge City with the Lazy J 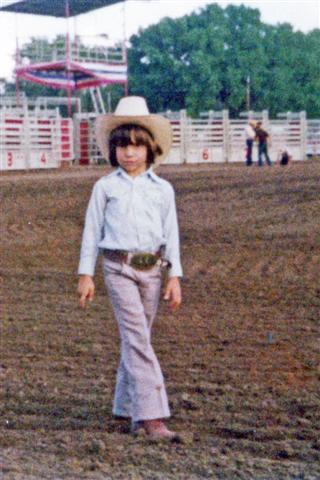 Almost showtime. Makin’ sure the arena is right

I sure wish those Leisure Suits would make a comeback.

A good friend, a good horse and a mud puddle. It just don’t get any better

Sharyl’s bestie from the Lazy J. Hope the golden years are good to you, Rosemary

You had to be there. Hill City, Kansas with the Lazy J. Frank was always good for a laugh 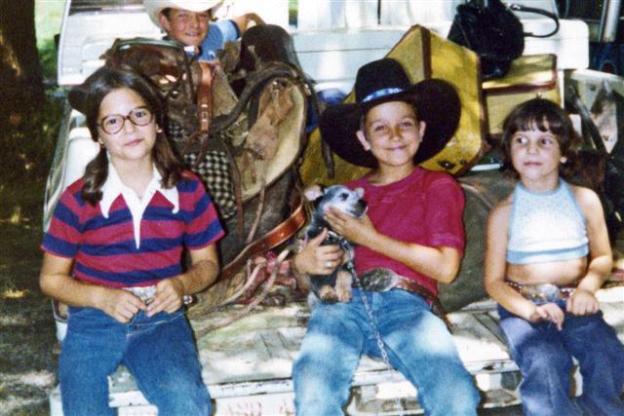 A good hat, 2 pretty girls and a dog named Blue. Nothing else needed. Runnin with the Circle A in this one.

Two of the best, kept the Lazy J running and made things easy for the guy on the right 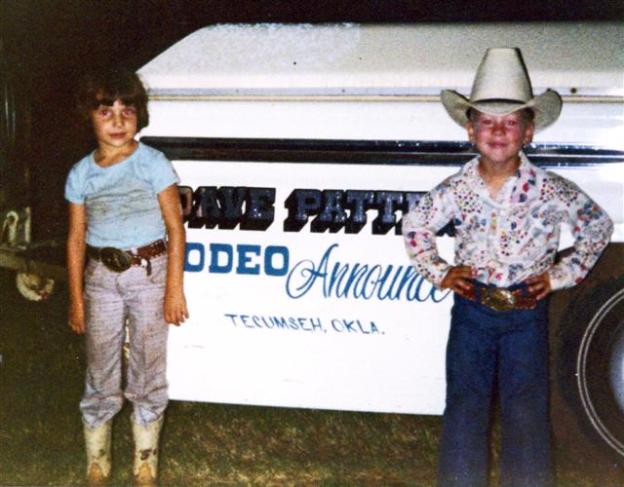 Sometimes you get a little dirty. That’s OK if you’re having fun.

Cute couple. Runnin with the Circle A here.

Dodge City, probably as close to the big time as i ever got.

I am out of pictures but I have one funny story to share. There is always an abundance of aluminum cans around a rodeo arena (imagine that). Some of the Circle A crew helped the girls get started in the recycling business. For about three consecutive weekends when we got home all the extra space in my equipment trailer was filled with cans; it sure smelled good in there.  We found time to take the cans to market; Lori and I unloaded them and gathered the cash.  The payoff was $8.50 when we got back to the truck I gave Lori the $5.00; I kept the $3.50 and gave Dava $5.00 out of my pocket.  I’ll do the math the deal cost me $1.50.  The next weekend the Circle A crew asked about the can business. Dava told them we had sold the cans but dad kept some of the money.  They never forgot.

Please consider a donation to the cancer research organization of your choice.  Keep me in your prayers.