One spring evening in probably ’96 or’97 Sharyl and I made another trip from Tecumseh to Norman. This time we came to watch Cale and Conner play a little baseball; it was their introduction to team sports and the grand old game.  The venue was an open field, with a makeshift backstop, out behind Perfect Swing Fun Center, in a recreational Tball league that didn’t even keep score.  They played for the Sharks, and yes Conner kept score, even at that age he saw no reason to play the game if you didn’t keep score.  He said they got a one run win, no one argued. 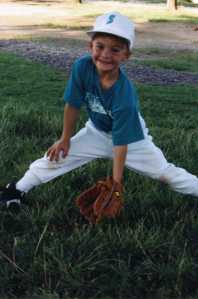 Last weekend I made another trip to, my home away from home, the great state of Kansas.  I went to watch Cale play a little baseball; he continues to pursue the grand old game.  The venues: a doubleheader at historic Lawrence-Dumont stadium in Wichita and a doubleheader at, not so historic, Dick Peters Sports Complex in Ottawa, Kansas.  He plays for the Friends University Falcons in the Kansas Collegiate Athletic Conference.  They keep score.  The Falcons won three and lost one.

During the, almost twenty years between the Sharks and Falcons, I have seen a bunch of ball games, traveled a lot of miles, made a lot of memories i.e. baseball became a much bigger part of my life than I visualized that spring evening at Perfect Swing when we didn’t even keep score.

The memories from all those miles and games bounced around the old brain for much of the five or so hour drive home from Ottawa Saturday evening.  If it is okay I will share some of those thoughts.

Over the years I cheered for Sharks, Rays, Yankees, Red hawks, Predator, Timberwolves, Lions, Trojans, BJs, Mountaineers, Stars, Heat, Falcons and at least three others, I just don’t remember their names.  I do remember one of them wore these god awful multi-color hats that should only be worn by true red necks at a NASCAR race: those hats were so bad, I think, only two of the dads wanted one.  The team wasn’t quite as bad as the hats.

I addition to the various venues in Norman, Davis Field in OKC, that old complex in Del City and about half the high schools and Colleges across the state, I have watched the game in: Kansas City, Longmont, CO, Phoenix, AZ, Bradenton, FL, Grand Prairie, TX, Hanceville, AL, Clarendon, TX, Morgantown, W VA, Hutchinson, Liberal, Hayesville, Derby, Wellington, Wichita and Ottawa all in Kansas. I’m sure there are others.

During the pre high school years I would do almost anything to avoid going to the restroom at those little league parks; had to be real careful or you would be tagged “it” in a game of pee tag with some 8 year olds.  I think there is an unwritten rule that the first guy to arrive is supposed to stop up at least one commode and sometimes they only have one.  My worst bathroom award goes to Davis Field and it really isn’t close.

During the early years we always took a quilt for Rylie, she was about 3 or 4, one of the coaches had a darling little girl about two years old.  She was ALMOST potty trained, but she always and I mean always came untrained during the game and she always peed on Rylie’s quilt.  On a good day she would make it until the late innings.

May 3rd ’99 we were in the 4th inning of a close Tball game at Griffin Park here in Norman when the tornado warning sounded and the game was suddenly over.  Lori and I loaded the kids in the backseat and started to devise a plan to keep them safe.  A calm backseat would have made our tension filled task a little easier; nothing about that backseat resembled calm.  Conner was trying to convince himself and anyone who would listen that we had played enough innings to call it a complete game and give us the one run victory.  Cale was wailing because we had to leave before he got his post-game snacks and Rylie was just upset and really didn’t know why.  An hour later, the storm had passed, and we were safe but Conner was still seeking confirmation that we had won the game and Cale was still moaning about missing the snacks and, by now, Ry was probably just trying to get them to shut up.

A couple years later, still playing the recreation league at Griffin, our first base coach was a prominent Norman physician. One late afternoon game, he either made a call or received one on about 5 minute intervals; I think it was the bottom of the 2nd inning he got someone to replace him and he left in a bit of a hurry.  He came back in the fifth inning with the good news.  It’s a boy and mother and baby are doing fine.  He had driven the mile to Norman Regional, delivered the baby and made it back to coach first base the last inning.

We moved from Griffin to Reaves, started doing some travel ball and taking the game a lot more seriously.  We played with one bunch that had spent too much time around the softball parks.  They tried to bring those softball chants and cheers to the grand old game.  I just moved my chair out by the outfield and tried to ignore them.

They did national tournaments in Kansas City, Hutchinson and Longmont in ’03 ’04 and ’05.  Triple digit temperatures made Kansas City an endurance test, Hutchinson must have been kind of mediocre, because I really don’t remember anything other than we went.  Longmont was a fun trip, nothing major but overall just a good trip.  They never won a national title, but this post is about what happened outside the lines.

The next year they became Norman North Timberwolves.  Probably the best run we had with the Twolves was to Phoenix for a spring break trip in ’08.  We watched some very good high school baseball and took in a couple of major league spring training games.  Later that summer we made a good run to Bradenton, FL to watch Cale in some kind of an Under Armor all American deal.

Prior to the ’09 season, the game of baseball dropped way down our priority list as we had encountered this thing called cancer and were in a fight for life.  There were a few times on a good day we managed to find a parking place and watch a few innings from the car.  We even made it to Grand Prairie, TX for a couple games of the ’10 spring break tourney.

We realized how lucky we were all those other years when we just got in the car and went to the ballgame. I guess we kind of assumed it would always be that way.

The guys’ first college stop was with the Wallace State Lions in Hanceville Alabama.  Sharyl wanted to go see her guys play a little baseball.  That trip, was by far the most difficult, baseball trip I ever put together.  The first thing I had to do was buy an RV, then we did a little trial run, then I made a list and checked it 5 or 6 times and what ifed the thing to the ridiculous point.  In April of ’11 we made that trip; we planned to stay three days and watch three games.  We stayed one day and saw one game. Would I do it again?  In a heartbeat.

WE went to watch THEM play more times than I recall; I remember like it was yesterday the first time I went to watch HIM play.  It was three years ago, he was playing for the Trojans, had recovered from some arm problems and was finally going to take the mound. The game was in Clarendon, TX out by Amarillo.  I don’t know why I didn’t spend the night, I guess I just thought it wasn’t a problem to drive 5 hours watch a doubleheader and come home.  Honestly it took about all the emotional strength I had to go there and I probably just needed to come home.  That trip took more than a little RED Bull and peanuts.

I have adjusted and I am now emotionally comfortable going to watch him. I don’t go every time he plays but I try to make it when we know he is going to pitch.  Is it as fun as the days when WE went to watch THEM play?  Of course it isn’t, but I enjoy the game, he appreciates me being there and the quieter two of the old foursome get to spend a little quality time together.

If I had to pick my favorite game of all of them, I don’t need to give it much thought.  That Sharks’ game at Perfect Swing all those years ago.

Disclaimer:  I normally do a little research to verify what I have to say.  I believe this one is factual, but it is strictly as I remember it.  Kind of like the Blog title “Random Thoughts”

Sorry for the length of this one, Thanks for riding along.