During my working years I would occasionally share a “grandkid” story with my co-workers. I didn’t have the market cornered; most grandparents do this.  One of those co-workers told me several times that I should write those stories down because I would forget some of them.  It has been more years than either of us care to recall since we worked together but we have remained friends.  It is not the kind of friendship where we see each other on a regular basis; we’re not in the same social circle.  It is the kind of friendship that when things got extremely tough for me I wasn’t the least bit surprised to see her there because she thought I could use the support of an old friend.

In my last blog I spoke of Sharyl’s competitive spirit.  My friend is one of those competitive types who never shied away from a little controversy, and some people will tell you that I am a little bit that way. When she and I worked together part of what we did was resolve controversial issues sometimes we didn’t agree on how things should be, neither of us liked to lose, and in a friendly way neither of us hesitated to say “I told you so”. If we were in agreement which was normally the case; the other guys were usually in trouble.

A few weeks ago, about the time I was starting to resume blogging one of us mentioned possibly including some of the old grandkid stories.  I said, “If I can remember them”, she flashed a little “I won one” smile and said, “I told you to write them down”.

I guess you have figured out you’re getting ready to hear a grandkid story.  I promise I won’t flood you with them but in an effort to keep this thing lighthearted I will share one from time to time.  Most of them will be humorous; this is just kind of a neat little story.

Before Sharyl’s illness Luke was spending the day with us I think he was four.  I came in the den and he was in the process of putting some of his thoughts on paper, he had a pencil and a 3 x 3 post-it notepad.  He still had a little problem pronouncing his Rs and I hadn’t started using the hearing aids so sometimes we had trouble communicating.  He asked, “How do you spell yaw?” (I can’t spell it like he said it but I think you get the idea) I didn’t want o offend him by asking him to repeat, instead I asked, “How are you using it?” He said, “Yaw da best Mama eva,” For you grammar police I didn’t know if he knew about contractions and apostrophes and I didn’t want to go there if he didn’t so I said Y-O-U-R, I think I helped him with best and ever and he continued to write and I resumed whatever I was doing.

A little later I came back in the den, Luke was somewhere else by now; the post-it note pictured was stuck to the TV cabinet. 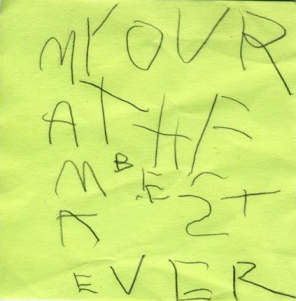 I shared it with Sharyl and tucked it away in one of those drawers where things get buried and forgotten, or am I the only one who has those.  I was looking for something else; I didn’t find what I was looking for but I found the note.  You may need to spend a little time with it but it says, “Your the best Mama ever”.

We disagree on the spelling, Mama vs. Maw Maw but we completely agree; she was “da best Mama eva”.

The next picture is of my flowerbed after two applications of weedeater; remember that is the heavy-duty gasoline powered weedeater. Seems to be working. I call it “tough love” for flowers. 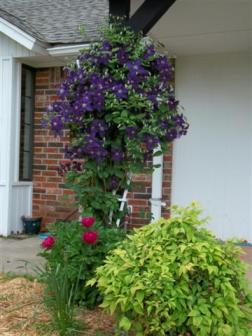 I think I am getting a little bit of writers block, I have some thoughts but I can’t seem to get them to flow through the keyboard, so I may need to take a short break.  I know if I keep it lighthearted I will need a break because for some very personal reasons May isn’t going to be a very fun month.

Please continue to remember me in prayer.