I continue to discover household chores Sharyl did that are now my responsibility.  The most recent is clutter control. She believed everything had a place and everything should be in it’s place or at least out of site.  She was diplomatic in the way she did it; she would say, “What do you want me to do with this” screwdriver, computer, book, or whatever I had left in the floor or on the dining table or bed or countless other inappropriate places.   Interpreted she was really saying, “If you ever want to see this again you better get it out of here now”. Knowing that, my response was always “I’ll take care of it”.   If you picked up a newspaper at our house you could be reasonably sure it was today’s; I picked up five this morning (none of them today’s) and they are still on the kitchen cabinet but they are in one pile.

I have always been a clutterer, (I know clutterer isn’t a word but just for this blog I am going to pretend it is).  My desk at work was considered disgraceful by most of my co-workers; the workbench in the garage, ok, the whole garage has always been a pit.  About ten years ago Sharyl gave up and let me clutter my computer desk; I think she learned to completely ignore it.  I took a pic of my desk today, nothing was staged this is the normal look, the way I like it. 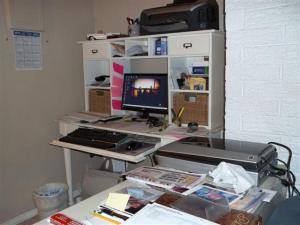 Over the past six months the amount of visible clutter throughout the house had steadily increased, it had gotten to the point I had to move “that” to make room to sit “this” down; obviously it was time to add clutter control to my household chores.

Another thing it was time to do was go through some things that were tucked away in closets and drawers and other assorted cubbyholes.  Some of those things were very personal, others not so much. Immediately after Sharyl’s death the girls took the lead and we did the big stuff; it was difficult but a wise decision. I don’t know what I would do without my girls.  The task that remained was not a team thing; I needed to do it. I think the right time is different for each person, 6 days, 6 months, or 6 years or maybe for some not at all, but for me it was time.

I quickly realized there are two types of clutter, “open clutter” and “concealed clutter”.  Sharyl was a clutterer, however her clutter was concealed.  Inside every drawer, on each closet or vanity shelf, I found; there is no other word for it “clutter”. Mingled with the clutter in each of those places were a lot of memories, some of them very precious and some of the more recent ones not so precious.  I had a little bit of the concealed stuff; we both had a tendency to keep cards, especially birthday or anniversary cards from each other.  It is kind of eerie how similar our taste in cards had become.  I even found some of my old open clutter that I didn’t take care of; it was still clutter it had just been concealed for years.

Here is a pic of one of the good memories.  Sorry for the repeat if you saw it on Face book. 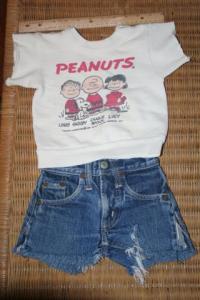 Am I through?  No and I probably will never be but I have made a lot of progress, It would have gone a lot quicker had it not been necessary to sit down in the middle of the floor and shed a few tears from time to time.  I think/hope I am about through with the emotional stuff, I just need to change my ways and finish getting rid of my open clutter.

This initial run didn’t include the kitchen.  I kind of learned to use that the way she had it, I thought my time there was temporary.  It didn’t turn out that way; I have some thoughts for doing it a little different, but that is a whole nuther project and if I am still blogging (don’t know if that is a word) it probably will warrant it’s own post.  I do know we have at least 15 or 20 cookbooks that are occupying space I could use for other things.  I don’t use cookbooks, I just Google until I find a recipe simple enough for me to understand.  I still don’t really know the difference between chopped, diced and minced; I think chopped is bigger chunks. I will keep the cookbooks, after all I know at least one of them was a wedding gift.  I will just move them to a more suitable location.  I guess you could say they will become clutter either open or concealed depending on the new location.

God Bless and keep me in your prayers.