Each of us has two biological parents, four grandparents, eight great grandparents then sixteen and thirty two; I don’t want to hunt a calculator so I’ll quit there.

If you read what I write you knew it was coming.  The genealogy bug has bitten me, I am now a dues paying member of Ancestry Dot Com. That looks kind of funny with Dot appearing as a word instead of just a . doesn’t it?

Most of the people I have encountered, that are anxious to share their genealogical research with me, have found a Prince, a war hero, a Pulitzer winner or some other type of fame or royalty in one of those many branches. They normally don’t say much about the other branches.  So far I didn’t find that guy and quite frankly I don’t really care.

Two things tweaked my curiosity enough to take a peek up among all those branches.

I have always been a little curious about my Native American heritage. I have no desire to put my name on any tribal rolls. Kind of like the war hero or royalty, it wouldn’t change who I am.  I have just always wondered, after all I was born and raised in “The Home of the Redman”.

I had the pleasure of spending time with three of my grandparents as I grew up. I spent more time with my mom’s mother, we always called her gram’ma; I know it is spelled grandma, but we didn’t use the N and P when we said it. I have always wanted to use her picture in a blog.  I don’t know when this was taken because she always looked like that.  I also don’t know if she had knees because I never saw them.

If she looks familiar, just think about Sylvester and Tweety Bird, and yes she always had a bird and some cats. 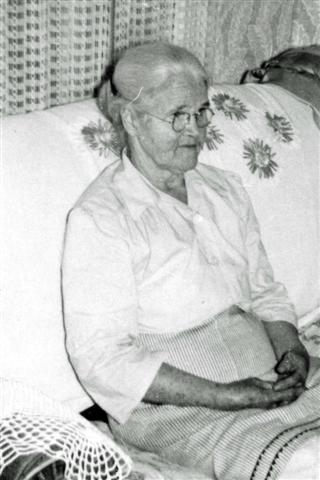 That fourth grandparent is the other reason I have joined forces with ancestry.com. I didn’t even see a picture of him until I was almost 70 years old.

The only thing I knew was that he went after that proverbial “pack of cigarettes” when my mom was about 7 years old. Leaving the sweet little lady pictured above to care for five kids, the oldest was about 10 or 11, the youngest about 2 and severely physically handicapped.

He came back (I don’t know if he found the smokes) about 7 years later.  He only stayed a short time. This time my uncles, now in their late teens, sent him for cigarettes and suggested a one-way trip would probably be in his best interest.

What I have learned: He was born in Fannin County, Texas in 1882.  I think I know who his parents are but I’m still looking for proof.  The 1890 Fannin County census would provide that proof, but those documents were destroyed by fire.  I suspect his parents may have burned the evidence and changed their names because I haven’t found them since 1884.

In 1910 he was In Oklahoma married to my gram’ma, they had two of the eventual five children.  He was still there when he registered for the draft in 1918.

The 1920 census shows him in Newkirk, Ok married to a lady named Nora; gram’ma’s name isn’t Nora.  For the record he and my grandma never divorced.  He was living in California with the Nora lady in 1924.

There is no documentation to prove this but I believe it was about 1926 or 27 when he came back to grammas house for the short stay.

The 1930 census lists him as an inmate at San Quentin Prison in California; maybe he stole some cigarettes.

In 1940 he was living in Arizona with a lady named Gerta, again this wasn’t gramma’s name.

He died in California in 1946.  I’m sure his side of the story would have been interesting.

I have learned a couple things. If you can’t handle the answer, don’t ask the question (I already knew that) and just maybe some of my problems are genetic.

If I happen to find that super hero I will share that with you, just remember I shared the rotten branch first.

I think I have the initial answers to the Native American questions.  I always thought I was 1/8 Chickasaw. I based that on what I thought was good and logical information. Based on the documents I have reviewed recently I now believe I am 1/16 Cherokee.

I plan to spend some long gray winter days running the various branches of the tree.  I promise I won’t use it as blog material again anytime soon.

I had a good run to the lake last week.  I think life is getting a little better, but it is still up and down kind of like the Yo-Yo.

Please keep me in your prayers; I know the next few months are going to be a real challenge.  Thanks for all you do.

7 thoughts on “No War Heroes, No Pulitzer Winners…”