I hope it is okay if I share some very random thoughts from a long cold day in the cabin. 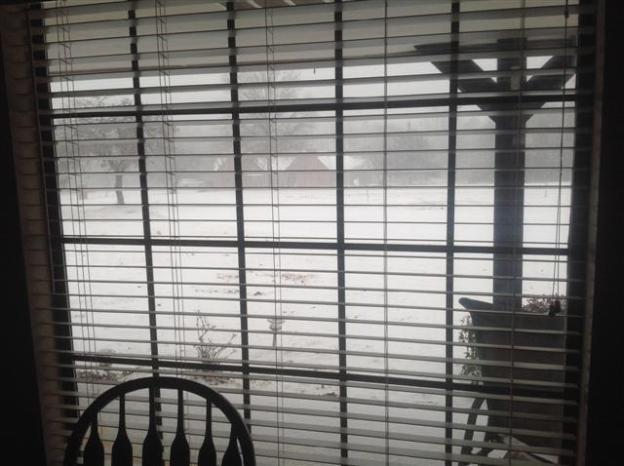 I snapped the picture with my Ipad (don’t know how I made it without that thing) about 8:00 this morning; the view is out the front window of the cabin I call home.
I intended to spend part of a gray snowy day blogging. For some reason this old keyboard doesn’t seem to work before 10:00 in the evening and usually does a little better after the midnight hour.
Cabin fever has been rampant this winter and really became an issue this week. I tried a cabin change for a couple days; that provided some much needed temporary relief but I am back home and the fever seems to be coming back.
I think it is easy to get excited about a new diet when I am full of chicken fried steak, mashed potatoes and gravy. I think it is difficult to implement that plan when I am craving chicken fried steak, mashed potatoes and gravy. I’ll let you which Dave wins that battle.
I think it is crazy that I kicked a smoking habit about 30 years ago, however at various and unusual times I still want a cigarette. I had one of those cravings just as I indulged in a second cup of coffee this morning.
Almost six years after my final day at work I think I have acquired a retirees mindset. The first few months I thought retirement was all about hurrying to get all those major projects and little honey dos done. The road took an unexpected turn and became extremely bumpy for the next three plus years. The next year or so I was too busy trying to figure things out to remember I was retired. I think I have finally figured it out. I may want to explain it someday . . . or maybe not. Told you I had it figured out.
I know you remember this guy and yes I think any vehicle that gets in your heart should be a guy or gal.

He now has a name; the name isn’t gender specific but I would never treat a lady the way I treat this guy. I thought about Teddy because of the rough ride or I could have gone with something real original like Willy, bet there has never been a Jeep named Willy.
His name is Val; it could be short for an old girl friend named Valerie but I don’t think there is a Valerie from my past and this Val is a guy, remember. It could be short for Valentino but I wouldn’t and couldn’t do that to my tough little redneck Jeep. It is short for Valium because of the calming effect it has when we go down the road. The noisy fuel pump kind of interferes with that calm but spending some time together in the garage is part of the relationship.
I think I feel better. I hope you aren’t upset that you took the time to read this one,
Let’s all pray for an early spring.
Good Night and God Bless.
Dave

One thought on “Looking Through the Cabin Window”